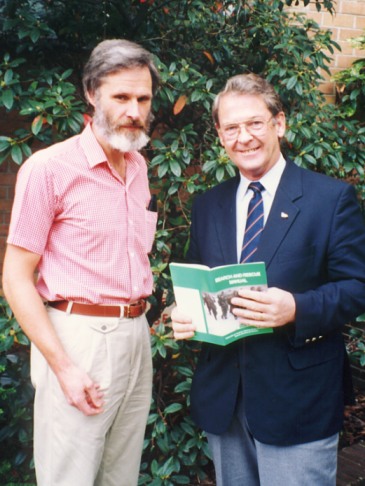 John attended many searches and became a Group Leader.

John was a Field Organiser for twenty-eight years from March 1973 until March 2001, during which time he lead Bush Search and Rescue members on 17 searches.

He was chair of the sub-committee that prepared the first edition of the Search and Rescue Manual in 1993.

John served as a Police Liaison Officer then Membership Secretary until November 2006.

John is currently active as a Peer Supporter with Bush Search and Rescue.

John also holds the record for length of service as a member of the Bushwalking and Mountaincraft Training Advisory Board, including chairing the steering committee and being Director of Final Assessment from 1978 to 1980.

Bush Search and Rescue Victoria is very grateful to John for his long and dedicated association with and contributions to the organisation.

John is currently active as a Peer Supporter.

John was awarded the Emergency Services Medal in the 2017 Australia Day Honours in recognition of his outstanding contributions to search and rescue in Victoria since 1961.

Photo: John Retchford with then Minister for Sport, Recreation & Racing, Hon. Tom Reynolds, at the launch of the 1st edition of  the manual, 8th May 1993