In late 2017 Bush Search and Rescue members acquired a first round of twenty high-vis durable rain shell jackets for searching.

These were purchased with a grant from Emergency Management Victoria and funds from Bushwalking Victoria.

ACR ResQLink PLBs are the smallest PLB available, weighing in at only 130 gm.

These 406 MHz beacons enable search organisations to pinpoint a person in distress to within 100 metres.

END_OF_DOCUMENT_TOKEN_TO_BE_REPLACED

BSAR hi-vis softshell jackets were first issued to members in 2013.  They complement the BSAR hi-vis safety shirt, beanie and cap. 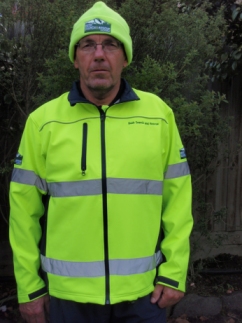 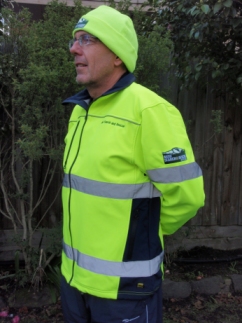 These jackets were provided through the funding support of the JJ Gardiner Trust, via the Alpine Search and Rescue Victoria club, the Victorian Department of Justice, and Bushwalking Victoria.  BSAR is very grateful for the generous support that enabled its members to be so equipped.

The jackets are durable, showerproof and provide good insulation.  They are also suitable for use in alpine environments.

Bush Search and Rescue members are being provided with safety shirts for use on searches.

These shirts are highly visible and stay warm if they get wet.

We are also providing high vis caps and fleece beanies.
The items have been purchased with a grant from the Department of Justice Victoria and some additional funds from Bushwalking Victoria.

Our thanks to the Department of Justice Victoria, Bushwalking Victoria and the JJ Gardiner Trust for the funding of the safety clothing for our members.

END_OF_DOCUMENT_TOKEN_TO_BE_REPLACED

Personal Locator Beacons (PLBs) can be used during an emergency situation (typically in in remote areas) to summon emergency assistance via a radio signal that is picked up by satellites and commercial aircraft.

However, the Australian Maritime Safety Authority (AMSA) has reported that many people in Australia are misusing these devices.    248,000 PLBs are registered in Australia.  During 2012, 1,700 PLBs have been triggered nationally, with 266 searches resulting, but only 109 events were genuine emergencies.

Some beacons are being triggered in capital cities and urban areas.  There have been 400 inadvertant activations and 21 confirmed hoaxes.

PLB users are reminded that distress beacons should only be used as a last resort when there is a threat of grave and imminent danger. In an emergency, communication should first be attempted using radios, phones, SPOT devices and other communications devices available.

END_OF_DOCUMENT_TOKEN_TO_BE_REPLACED

Recent searches have showed that a number of radio batteries failed in cold conditions.

The aims of testing were to:

END_OF_DOCUMENT_TOKEN_TO_BE_REPLACED

A number of batteries commonly found on supermarket shelves and hardware stores in Australia were recently put to the test in the Garmin Vista HCx GPS units commonly used by BSAR. Fresh batteries were purchased in packs of 4 and the standard price noted per battery. Batteries were placed in a GPS unit. The unit was turned on and operated such that it displayed the Main Menu screen. The GPS unit was placed on a shelf at room temperature.
END_OF_DOCUMENT_TOKEN_TO_BE_REPLACED

GPS and Avalanche Transceivers can be borrowed by BSAR members for up to two weeks at a time. This allows members to become familiar with the equipment in their own time.

To borrow a GPS unit, please contact and equipment officer.